Home » You don’t want to miss the 2019 Extreme Festival

You don’t want to miss the 2019 Extreme Festival

Adrenaline junkies, prepare yourself for the experience of a lifetime at the Extreme Festival. Brought to you by Sumitomo Rubber South Africa, this motoring event offers you an exhilarating day of national racing. If you’re feeling inspired after the festival, you can find a thrilling ride of your own on Auto Mart.

Since its inception in 2012, the Extreme Festive has grown into one of the most anticipated events of the year. In 2015, the MSA National championship series was incorporated into the festival. You can catch this thrilling racing roadshow at all the national grade circuits in the country. The Extreme Festival takes place under the MSA sanctioning body.

When: Saturday, 2 March 2019
Where: Dezzi Raceway, Port Shepstone, KwaZulu-Natal
Tickets: Adults pay R80 at the entrance and kids under 12 can enjoy the show for free
Opening times: The event runs from 8 AM until 5 PM

Event highlights to look forward to

Car fanatics will get an opportunity to see their favourite vehicles up close and they can even chat with the drivers to get the scoop on what it’s like to sit behind the wheel of these powerful machines. This event is of particular interest to Polo drivers, as they’ll be able to see cars similar to their own hitting the track.

Visit the open area for an interactive experience that won’t be easy to forget. Another reason to attend the show is that you’ll get to see Jeffry Kruger in action. As the reigning champion of the Falken Polo Cup, watching his daring driving on the track is an impressive sight to behold. Clinton Bezuidenhout is another driver you should keep an eye out for on the day.

Do you have a need for speed? Make sure that you check out the six races that are scheduled to take place at the festival. The races you can expect to see include the following:

● The Falken Polo Cup
For any VW Polo fans, this race is a not-to-be-missed part of the event. You’ll get the opportunity to see modified VW Polos hitting the circuit in a competition to cross the finish line first.

● The Global Touring Car series
Witness the action on the circuit as GTC cars equipped with 2.0-litre turbo-powered engines tough it out on the track for first place. This is the first time that GTC series drivers will be competing on this track. The adaptations to the circuit enhance the experience for drivers and spectators alike. Measures have been taken to level the gap between newby and experienced drives, making this an adrenaline-pumping competition for everyone involved.

● Investchem 1600
Premier single seat racing will have you sitting on the edge of your seat. Get down to the circuit to see what these powerful machines are made of.

Sumitomo Rubber Industries is located in Kobe, Japan. As one of the leading manufacturers of tyres on the international market, SRI has established a reputation for excellence. The South African plant was established during 1973 in Ladysmith and the tyres that are manufactured at this plant are sold locally and across Africa.

From the exciting races to the interactive experiences, there are plenty of reasons to visit the Extreme Festival. Looking for the ultimate ride? Find cars for sale on Auto Mart today. 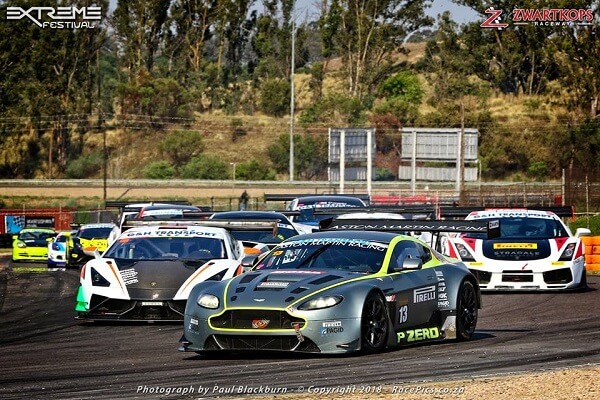