Home » Unleash the adventure within you with the West Coast Baja

Unleash the adventure within you with the West Coast Baja

If you’re into endurance races like the Dakar then you are going to love the West Coast Baja. Top quality off road vehicles like quadbikes and motorbikes for sale are taken to the small town of Namaqualand and riders let loose over 240 kilometers of unforgiving wilderness. Riders are put to the ultimate test over some of South Africa’s most diverse and rugged terrain. Keep reading to learn more about this epic adventure race.

Who is hosting the event?

The West Coast Baja is part of the Amageza which is a collection of off-roading adventure races. Amageza mean crazy in Xhosa which is a required ingredient if you want to take on these races. Riders can expect long marathon type stages that cover a huge variety of terrain. The fist Amageza motorbike racing event was held in 2011 which was called the Amageza Rally and was hosted in the Karoo desert on the treacherous skeleton coast.

Where is the West Coast Baja taking place?

This endurance race takes place in the scenic town of Port Nolloth in Namaqualand on the northwestern coast of South Africa. The town is situated 144 kilometers from Namaqualand’s biggest town, Springbok. The port was first created to help with the shipping of copper and diamonds from close by areas that are rich in precious resources.

Today the town has small scale fishing activities and small vessel tourism. It is also a commercial hub with many holiday homes and caravan parks for visitors. The Richtersveld National park can be accessed through Port Nolloth and this also contributes a lot to the town tourism industry. 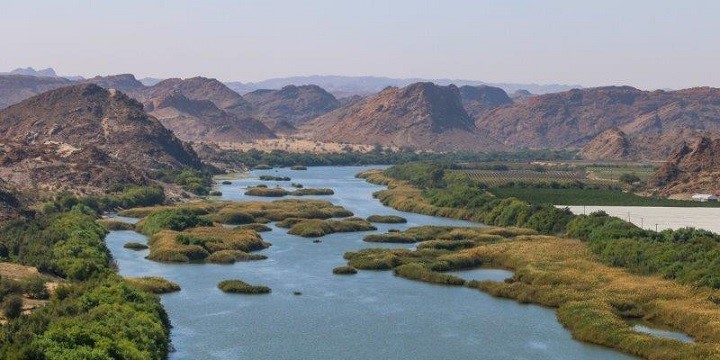 The Baja is a motorbike racing sporting event that takes place on varied terrain. The Race takes place over two days but there is a facultative prologue and you are allowed to take three days to complete the course. This is intended to test a driver’s endurance, skill and the quality of the rider’s vehicles. If you enter this race you can expect to traverse terrain such as mountains, rivers, dunes, tar road and even snow conditions. It’s the ultimate test of man and machine.

The purpose of this motorbike racing competition is to give competitors that are new to professional adventure racing an opportunity to compete on a world class track. As the scenery is so diverse in this race, cross country rally drivers can get a taste of international courses. This is the perfect place to hone their skills and seasoned Baja drivers can join the Amageza Elite Class which will give them better starting positions for other rally races. 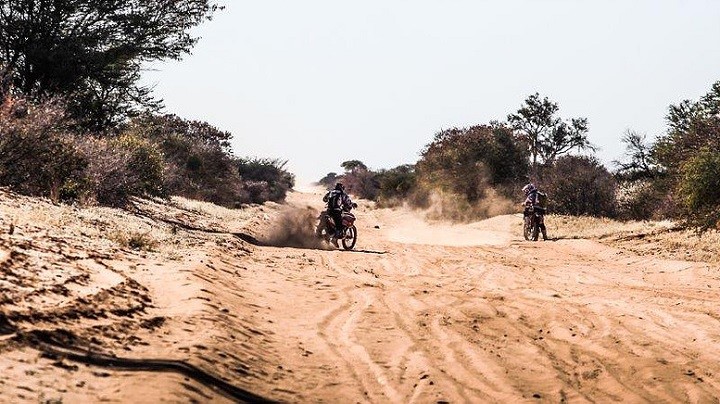 There are two classes in the West Coast Baja, these are the Rally and the Rally Lite classes.

The Rally Lite class has a required fuel range of 120 Kilometers and navigation must be done via GPS tracking and Way-Point navigation. The Rally class must have vehicles with a fuel range of 240 Kilometers and the course must be competed using Road-book and GPS Way-points. The Rally class is obviously for the more seasoned drivers and there are no signs to tell you where to go.

If you wish to participate in the West Coast Baja then navigate to the Amageza Racing page. Please be aware that you have to get your tracking device from Satellite Tracker separately as it’s not included in the race package. 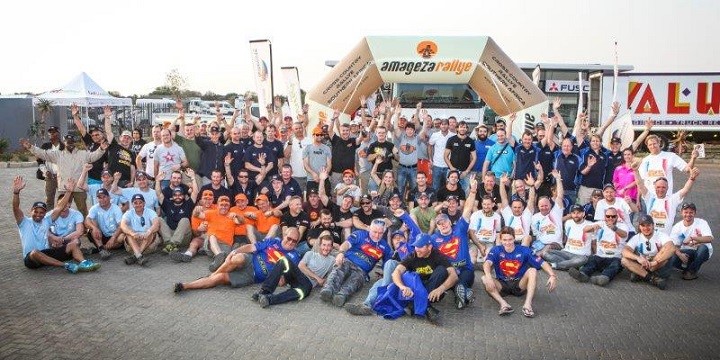 What vehicles am I allowed to use?

There are three classes of vehicles that can be used to race in the Baja, these are Motorcycles, quad bikes and Side x Sides.

Motorbikes for sale were originally created as stand-alone on road vehicles but people began adapting them for off road use. These enthusiasts began racing them in races called scrambles, which is where we get the term Scrambler from. Two men rocketed the off road bikes to stardom, this was Steve McQueen in his movie The Great Escape and Mr. Soichiro Honda who gave us the Honda brand.

In terms of motorbike racing for adventure lovers, like those taking part in the West Coast Baja, the bigger off road bikes are preferred. Bikes like the BMW R1200 GS that have dual purpose tires can be used on and off road. Then there are off road bikes for sale like the Suzuki V-Strom 650 which are dual purpose and have been designed for use on both off road trails and the street. 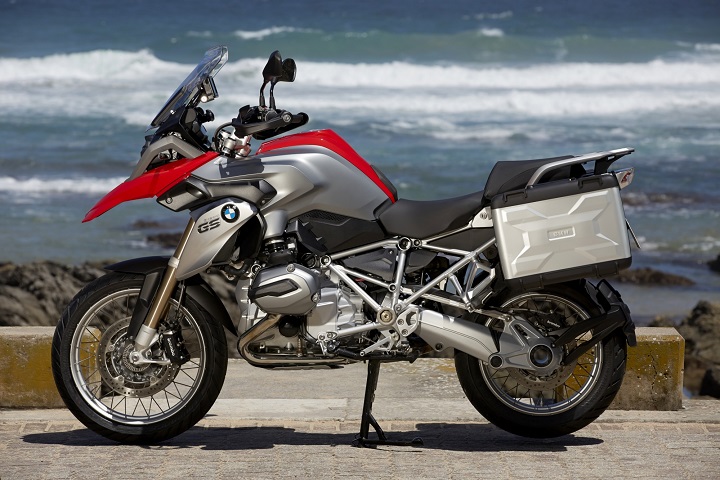 A quad bike is a variation on a normal two wheeler in the sense that there are four low pressure tires and the driver sits in the middle of the bike and steers using handle bars instead of leaning as on a motorbike.

First named the Quadricycle and designed by Royal Enfield in 1983 to replace horses and horse drawn carts, the quadbike became popular when Honda first made a three wheeled variant. Suzuki then caught on to the trend and released an entire range of three wheeled quad bikes and one four wheeled variant. The four wheeler very quickly killed all the competition and many American companies began creating their own Quad Bikes for sale. The three wheelers were phased out for safety and popularity reasons and this resulted in the four wheeled, off road kings that we know today. 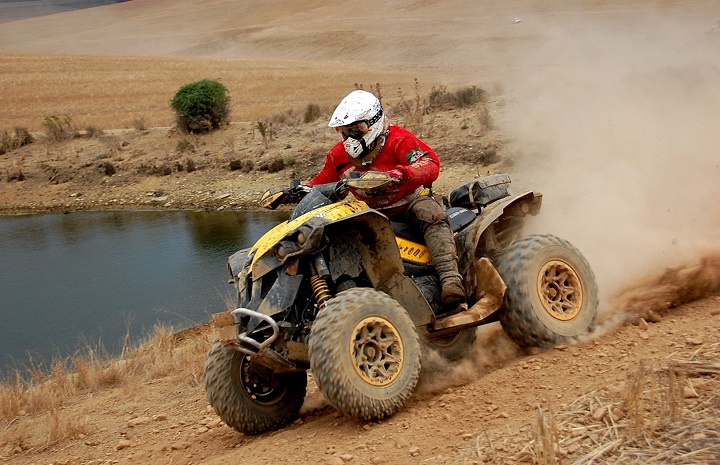 Today quad bikes can be divided into two categories, these are utility and sport. There are many quad bikes that are made for use in commercial and agricultural industries that have flat beds attached to them or six wheels for stability and control. The sport variants are the ones that you will need to use for adventure racing.

Some of your more popular quad bike manufacturers are Kawasaki, Suzuki and Yamaha who produce the majority of the world’s adventure quad bikes. Bike accessories are very necessary on an off road bike because if you fall, there is nothing to stop you from hitting the ground. Safety equipment is necessary here, more so than any other kind of off road vehicle. 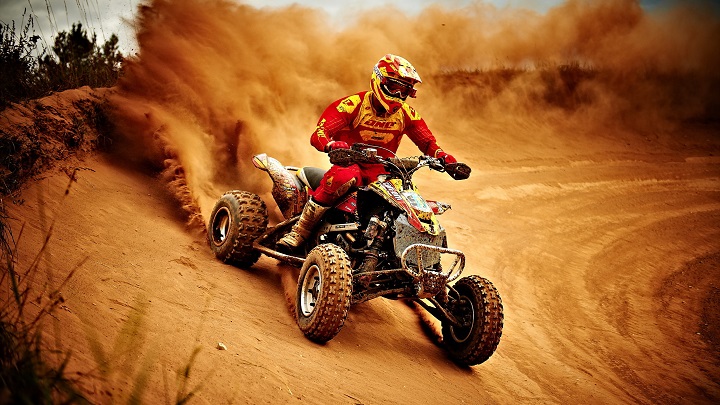 Side by sides were first used as vehicles for farmers and people in construction sites to easily and quickly move objects from one place to another. Then in 2003 Yamaha introduced a rear wheel drive version and made the first recreational side by side. It’s essentially a mixture between an off-road bike and a quad bike. This type of vehicle includes a wide range of all-terrain vehicles.

Modern adventure racing ready versions have two seats, roll bars, seat belt harnesses and a very comfortable cabin for the driver. They also have other bike accessories like custom doors for extra protection and many different headlights so the driver can see where they are going at night. 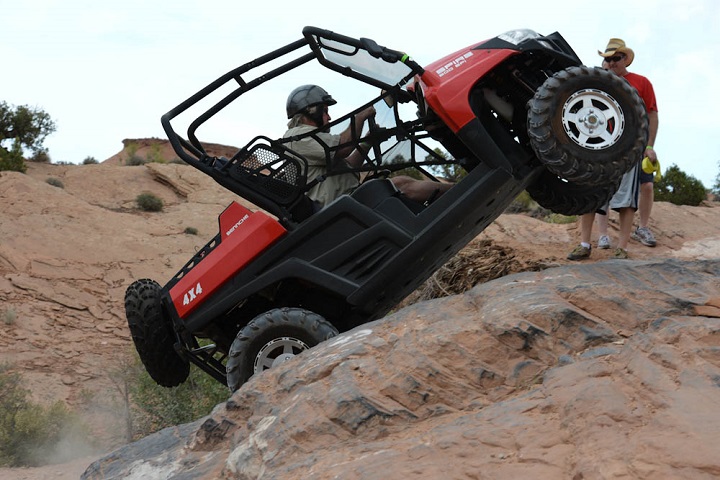 Looking for top quality motorbikes for sale? It doesn’t matter if you are looking for off road bikes, quad bikes or even bike accessories, Auto Mart has it all. Find and compare prices on a wide variety of vehicles and accessories.