If you are a true blooded South African, and you don’t own a Hilux, then you should definitely be looking for a Toyota Hilux for sale. In 2015 the Toyota Hilux was the bestselling car in South Africa. This makes sense when you consider what an amazing and useful vehicle the Hilux is.

The bakkie is tough as nails, fuel efficient, good looking and can perform more tasks than a Swiss army knife. It’s the perfect vehicle to tackle the unforgiving South African wilderness and its urban jungles alike.

Toyota is looking to release its eighth generation Hilux for sale in South Africa in the first quarter of 2016. Unfortunately, Toyota is keeping very quiet about the specification of the local lineup but there has been leaked information and speculation by people in the know. Let’s first take a closer look at Toyota’s history in South Africa and then look into why the Toyota Hilux 2016 will be the next South African legend.

Toyota first began selling vehicles in South Africa in 1961 and their first Toyota Hilux went on sale in 1968. Since then the Hilux has been bought over sixteen million times in more than 180 countries.

Toyota is now so ingrained in South African culture that in 2015 over a million Hilux’s were sold within our borders. Toyota has also been the market leader here for 36 years straight. So, why do South Africans love the Hilux so much?

To answer this we will do an in-depth review of the new Toyota Hilux. We will go into the changes that have been made and all of the new additions to the Toyota Hilux 2016.

It needs to be mentioned that before Toyota undertook their revamp of their legendary car, they did very intense research across South Africa. Toyota traversed the world, from Caracas to Kommetjie, to get feedback straight from the mouths of Toyota owners on many different types of terrain and environments.

This included everything from forests to muddy trails to flooded roads in subtropical regions of the world. Let’s see what all this research resulted in. 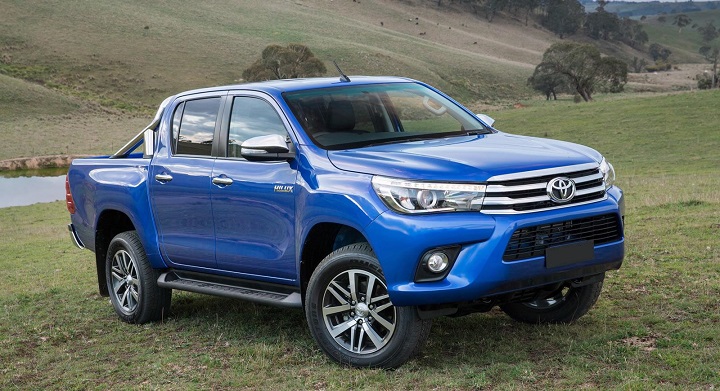 The Exterior of the New Toyota Hilux

Although the exterior does conform to the signature Hilux ‘tough’ appearance, the look of the Toyota Hilux for sale is a bit more refined. The upper Grille and headlights have been made to look more slender and they flow better into the car’s bumpers. Then the well-designed wheel flares visually integrate everything together.

The rest of the exterior has been beefed up. You get a stronger ladder chassis, sturdier tailgate hinges and a reinforced load deck with a much bigger loading capacity at 3200kgs. The New Toyota Hilux is also bigger than before. Its 20mm wider, 90mm longer and 5mm lower than the 2015 Hilux.

The interior of the Toyota Hilux 2016 Model

The inside has been modernized to include a seven inch touch screen which can be integrated with a smartphone, and has been shifted closer to the driver for ease of use. The instrument panel has a new analog speedometer with a rev counter on either side of a 4.2 inch colour display that can be controlled via the steering wheel.

The trim is now available in three levels. You can choose between soft textured fabric, a tough and hardwearing fabric for commercial use and leather in the top end Hilux models. 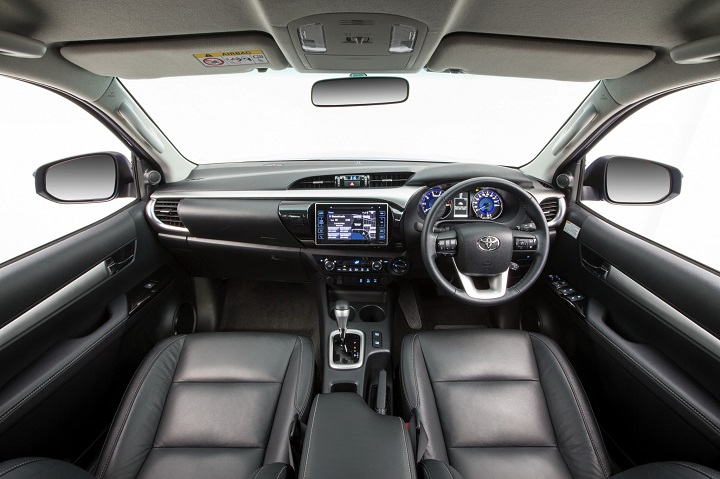 The new center console in the Toyota Hilux can hold up to 22 CD’s (not that many people use these anymore) and you can choose to include a 220V AC power outlet. There’s an auxiliary and a USB port with plenty of cup holders for those long trips.

In terms of safety, there are both active and passive upgrades. The new Hilux for sale has had airbags added to the driver’s knee area and in the high grade packages, trailer sway control to stop anything you are towing from getting out of hand. 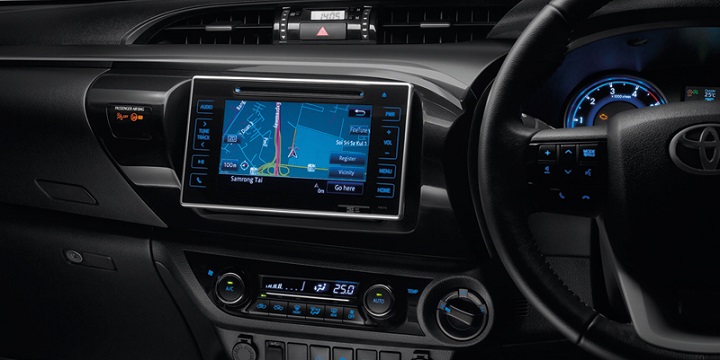 An all new suspension

The frame of the new Hilux has been completely redesigned. This has been done to bring the driver improved rigidity and strength. Toyota has used thicker cross members and higher tensile steel which will also mean you have improved handling and ride comfort.

The rear leaf springs have been improved too. They have been increased in size by 400mm and have been mounted 50mm further apart. This will have the effect of dramatically decreased vibrations and noise within the cab.

The Toyota Hilux for sale has a new all-wheel drive system that can be switched on at your leisure. This has been mated to a high-low range transfer, an electromagnetic differential lock and a limited front and rear slip differential. This means that the Hilux is even more comfortable on rocky or uneven terrain. The traction control system takes this a step further and can actually automatically brake a slipping wheel and then evenly distribute the torque to the tires that are on the ground. Toyota has also included a hill decent control that will help you go down a hill by limiting the car’s speed.

The Toyota Hilux 2016 comes with a few engine variants. You will have a choice between a 2.4, another 2.4 with higher torque ranges and a 2.8 diesel engine with a turbo diesel, variable nozzle design that uses new intercoolers. Then if you prefer petrol engines, there’s the 2.5 Liter D-4D, the upgraded 2.7 liter petrol variant and the ever reliable 4.0 liter V6.

The diesel range of engines have been designed from the ground up and have been dubbed the GD or Global Diesel series. Toyota has put a lot of emphasis on low speed power and torque. The initial 2.4 liter will be able to produce 110 KW of power and 343 Nm of torque. The higher output 2.4 variant will be able to produce 400 Nm. Then the top end 2.8 liter D-4D diesel engine variant delivers 130 Kw with 450 Nm of torque. 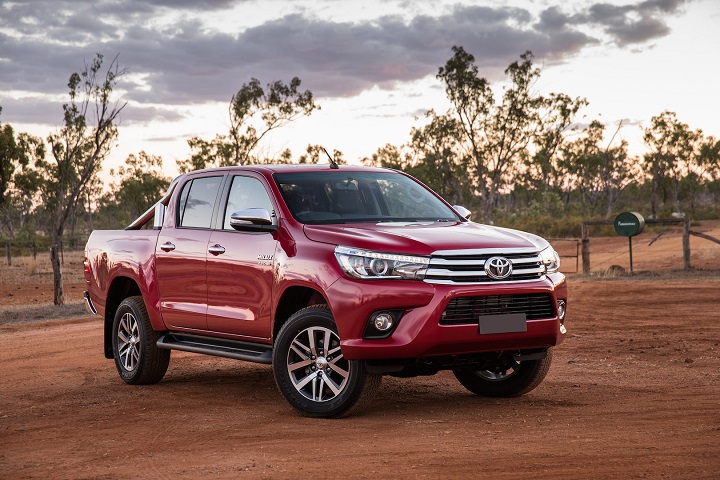 Interestingly, Toyota has made use of a new four wheel drive switch that can be flipped to allow the driver to change between 2WD, 4WD-Low and 4WD-High modes. This has replaced the old second gear lever in the Toyota Hilux 2016 models.

Although you might be chomping at the bit to get your hands on a Hilux model, you might be lacking the funds for a new car. Here are some great deals on Auto Mart: 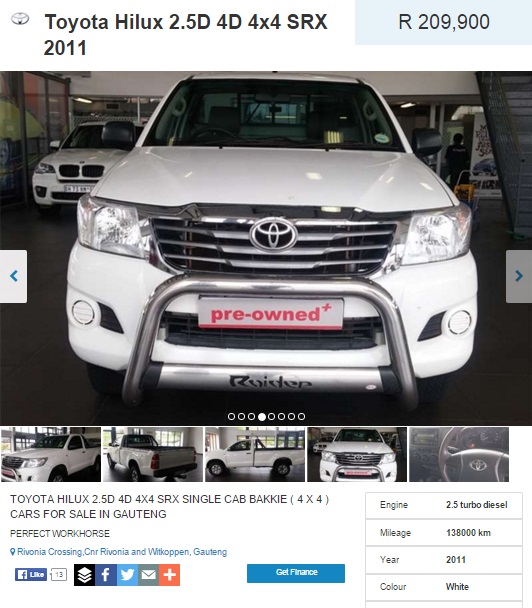