Home » The most iconic Lamborghinis ever produced

The most iconic Lamborghinis ever produced

When it comes to seeing a Lamborghini for sale South Africa is no different than the rest of the world – we all drool in excitement, dreaming of the day we can go out and find our very own Lamborghini for sale. Today, the Auto Mart team revs its engine for the Lamborghini, taking a closer look at the most iconic models to ever leave their garage. 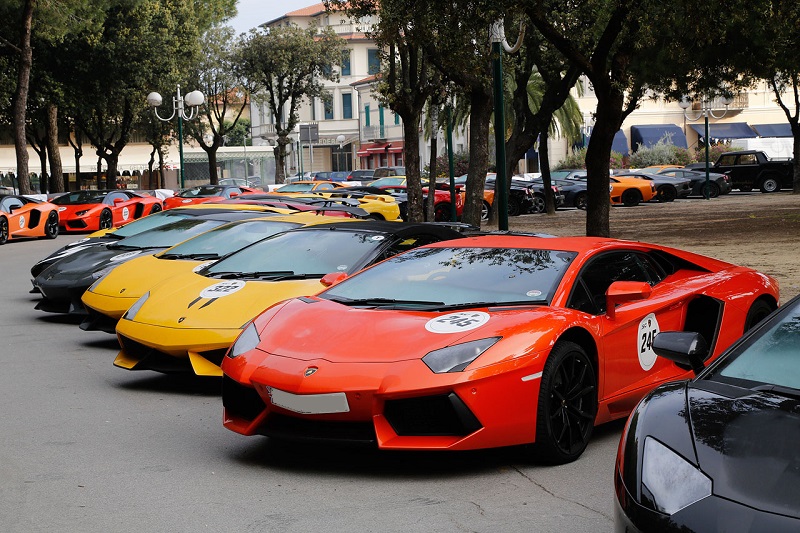 Ten of the most epic Lamborghinis produced (so far)

Starting off with the oldest model, here are ten amazing models, produced by Lamborghini. Remember, if you feel we missed an iconic model, share it with our blog community and tell us about your favourite Lambo in the comment section below.

An oldie but a goodie, this Lamborghini for sale was truly a beaut. With the 350 GTV prototype being unveiled in 1963, the car itself was only produced a year later, the prototype undergoing modifications to the bodywork and the name changing to the 350GT. 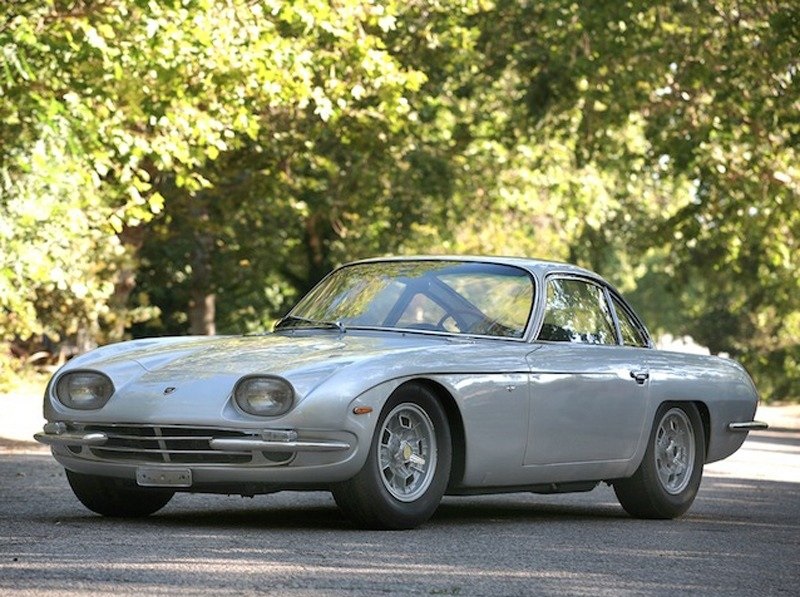 Said to have redefined the concept of what a sports car is, the Miura flaunted long lines and a look that, till this day, turns heads. Boasting a central V12 engine, this powerful beast was the fastest production car of its time, reaching a top speed of 280 kilometres per hour.

Note that the original version of this stunning sports car was produced during 1966 and 1969. It was during this time that 475 units were produced.

Featuring a truly iconic look, designer Marcello Gandini put beautiful lines and fascinating details down on paper to create what we know today as the Countach.

The first generation to come from this Lamborghini range was called the LP 400 which boasted a four litre, V12 engine mounted lengthwise that produced a horsepower of 375, a torque of 361 Nm and reached a top speed of 309 kilometres per hour. 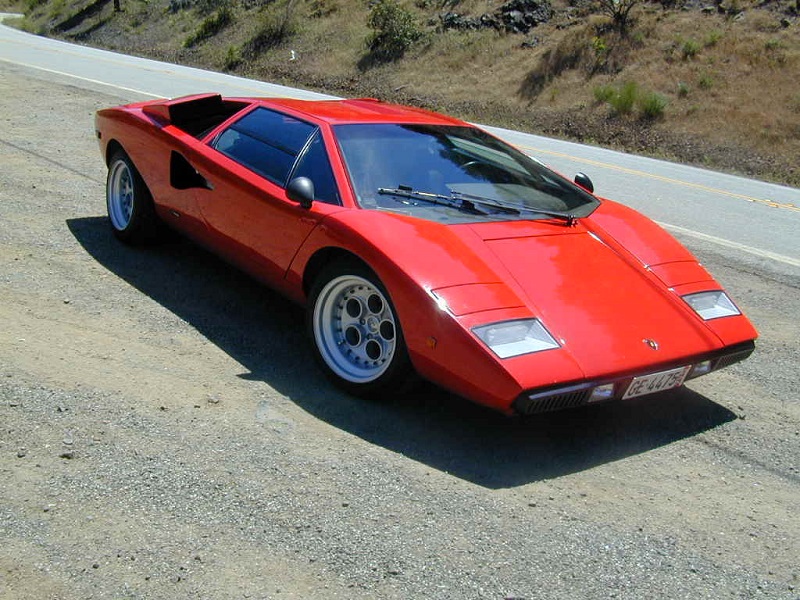 Seen as the heir of the Miura and Countach, the Diablo was anything but boring. A wide sports car, it sported a futuristic look that, at least I, associate with the nineties.

Producing a horsepower of 492, this rear-wheel drive Lamborghini for sale flaunted computer controlled multi-point fuel injection and a displacement of 5.7 litres.

Produced during 1990 and 2001 – also including several variations like the all-wheel drive Diablo VT – almost 3 000 units were sold. 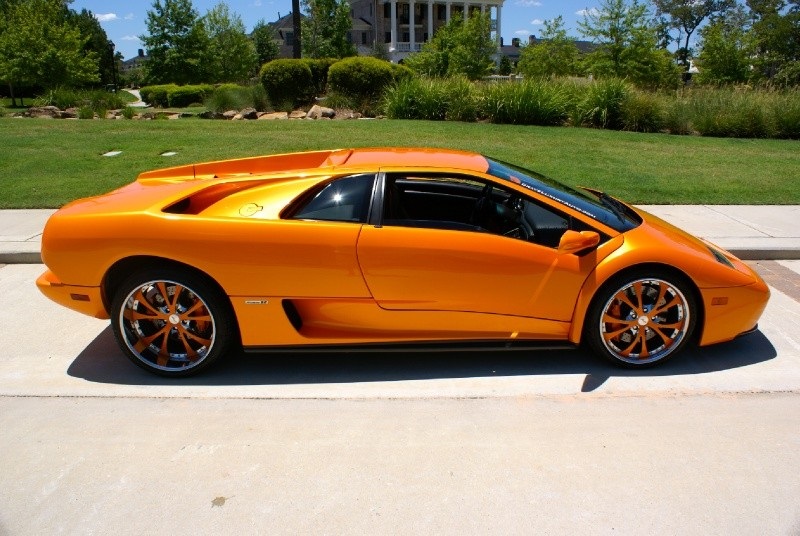 Lamborghini truly outdid itself once again with the introduction of the Murciélago, produced during 2001 through to 2010. With five models in the Murciélago camp that we simply cannot take our eyes off of, choosing one was just way too hard, so we decided to talk about each one briefly.

Sporting the traditional 12 cylinder Roadster tradition, the Murciélago Roadster had a more ‘open’ design that didn’t fall short when it came to safety and acceleration.

The Murcielago LP 640 Coupe was also a stunning beast. With emphasis placed in the interior and exterior design, this Coupe was like no other. With engineers placing focus on the gearbox, engine, electronics and exhaust, this Lamborghini for sale delivered a horsepower of 640. 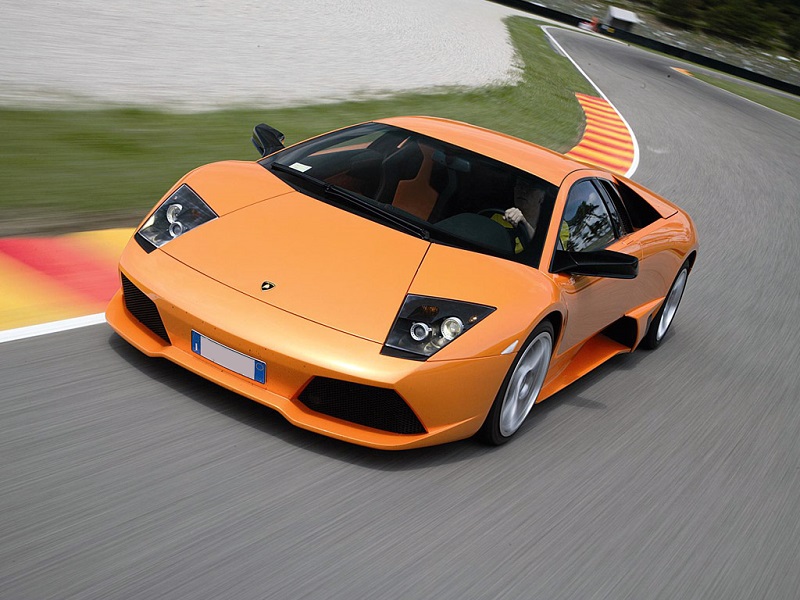 Also undergoing the special touch from designers and engineers as the Coupe did, the LP640 Roadster had a sense character that will most definitely win you over. With a tad more aggression in its design, the Murciélago LP640 Roadster’s interior was specially crafted to meet the needs of the driver.

Before we get to the limited edition in the Murciélago camp, we have to mention the Murciélago LP670-4 Super Veloce. With a weight reduction of 100 kilograms, this 6.5 litre V12 monster reached a top speed of 432 kilometres per hour and went from 0 to 100 kilometres per hour in only 3.2 seconds. Making use of carbon fibre materials, the LP670-4 delivered 30 more horsepower.

Lastly, the Murciélago LP 650 Roadster. With only 50 units produced, this limited Lamborghini boasted a Grigio Telesto exterior, beautifully making use of bright orange and a grey body. Delivering a horsepower of 650, this 6.5 litre V12 engine delivered a torque of 660 Nm, reached a top speed of around 330 kilometres per hour and flaunted permanent four wheel drive. 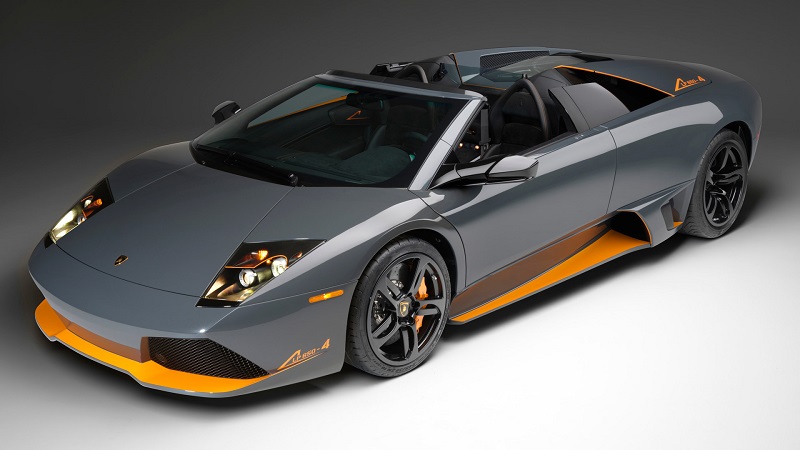 The Lamborghini Gallardo for sale, named after famous breed of fighting bulls, was produced between 2003 and 2013 and features eight gorgeous Lambos. The most affordable Lambo during its time, these models all featured V10 hearts.

Starting off with the Gallardo LP 550-2, which made use of a two wheel drive ESP system, allowing for a not only a good stability, but also a sporty driving experience. The rear wheel drive LP 550-2 Spyder was definitely a sports car to remember. Combining that priceless open-air experience with agile handling, this beauty was made for the more hands-on driver.

The LP 560-4, a four wheel drive model in the Gallardo camp, this Lamborghini for sale was treated to a front end redesign, a muscular look and a sporty shape you will find hard to forget.

Also a part of what makes the Gallardo one of the most epic cars produced by Lamborghini, the LP 570-4 Superleggera Edizione Technica flaunted a sharp nose with two large air intakes, four ceramic coated exhausts and a design that was inspired by the Super Trofeo championship cars.

The LP 570-4 Spyder Performante Edizone Technica reached a maximum speed of 324 kilometres per hour and went from 0 to 100 kilometres per hour in 3.9 seconds. Bringing out the brand’s beautifully intricate and high quality nature, the LP 560-4 Bicolre had a wider and more aggressive design, while the interior stitching and upholstery was, and probably still is, the image of class and sophistication.

A Special Series LP 550.2 Tricolore was also released within this series, featuring a V10 driveline and a look that is unforgettable.

Looking for a Lamborghini Gallardo for sale? Auto Mart boasts a handful of these models, so why not check them out for yourself…. 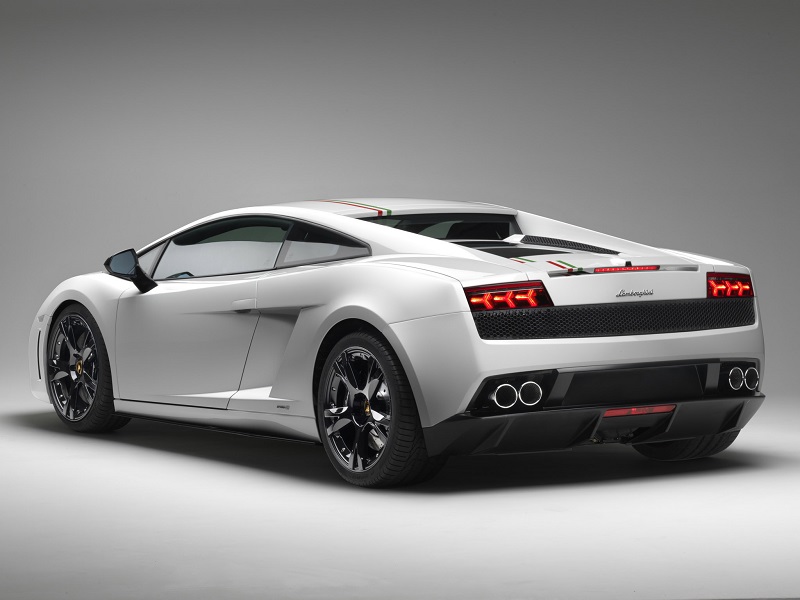 Boasting a 12 cylinder engine and a design inspired by the trends in the aeronautics industry of that time, the Reventón is truly one of the most beautiful Lamborghinis to ever grace tar.

Starting production in 2011, the Lamborghini Aventador for sale is a gorgeous and powerful piece of equipment. Featuring four models, each one trying to be more beautiful than the first, we wanted to highlight some features for each model in the Aventador camp.

First up we have the Aventador LP 700-4, equipped with a V12 engine and boasting carbon fiber tech combined with a breathtaking design. The LP 700-4 Roadster is no different, reaching a top speed of 350 kilometers per hour, a horsepower of 700 and goes from 0 to 100 kilometers per hour in 3 seconds.

The LP 750-4 Super Veloce is a sporty Lamborghini for sale that will blow your socks off. Also equipped with a V12 engine, designers and engineers made use of ultra-lightweight carbon fibre, producing a monster that delivers a power output of 750 CV. Like its older brothers, the LP 750-4 Superveloce Roadster is fitted with a V12 engine and an electronically controlled 4WD system that is supported by Lamborghini Dynamic Steering. 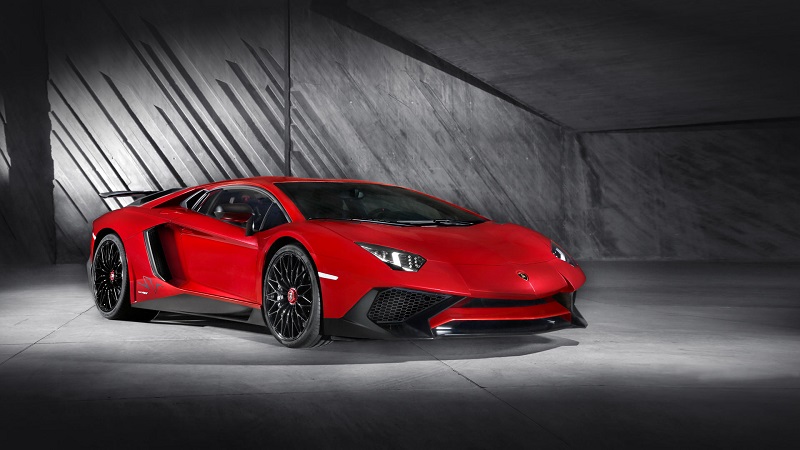 Highlighting Lamborghini’s outstanding performance in carbon fibre tech, the Sesto Elemento was produced in 2011 as an extremely special, and extremely limited, piece of pure art and power. It had a power to weight ratio of 1.75 kilograms per horsepower, helping this Lambo sprint from 0 to 100 kilometres per hour in just 2.5 seconds.

Weighing in at just 999 kilograms, the Sesto Elemento was fitted with a V10, flaunted permanent all-wheel drive and produced a horsepower of 570. 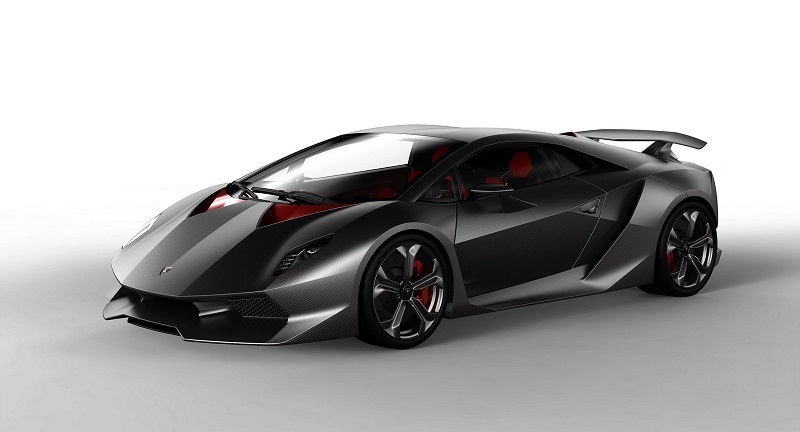 Starting production in 2014, the Lamborghini Huracán is not only a beauty, but sports stunning designs and elegant craftsmanship that will embed it in our Lambo-loving DNA for decades to come.

Boasting long smooth lines and a uniquely aggressive look, the LP 580-2 delivers a fun and exhilarating driving experience. Sporting a V10 90˚ IDS, 40 valve engine, this Lambo reaches a top speed of 320 kilometres per hour and goes from 0 to 100 kilometres per hour in just 3.4 seconds.

LP 610-4 Spyder is fitted with a powerful V10, a 4WD powertrain and a seven speed dual clutch gearbox. With a hybrid aluminium carbon fibre frame, this beauty reaches a top speed of 324 kilometres per hour and has an acceleration (from 0 to 100 kilometres per hour) of 3.4 seconds.

Boasting a hybrid aluminium carbon construction, the LP 620-2 Super Trofeo has a weight distribution of 42/58%, delivers a whopping horsepower of 620 and boasts a power to weight ratio of 2.05 kilograms/CV. Fitted with a V10, this Lambo is a rear-wheel drive and has a maximum torque of 570 Nm at 6 500 rpm. 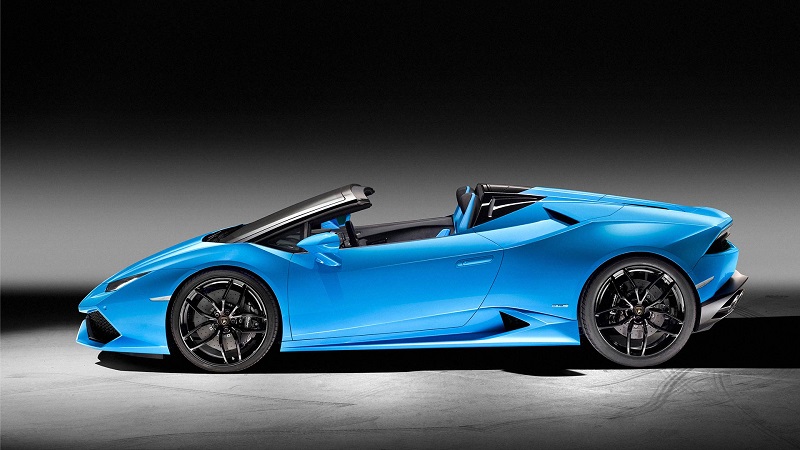