Some consider the Fiat 500 to be the greatest car in history. Considering that the Italian automaker sold over three million units from 1957 to 1975, there are a lot of people that agree with this. Since the car’s inception, its perfect simplicity and robust reliability have caused many to go looking for a Fiat 500 for sale. The Fiat’s ingenious design and proven track record only enforce its legendary status. It’s time to meet Italy’s answer to the Model T Ford.

The Fiat 500 was designed by Dante Giacosa and is known as the “cinquecento”, which, translated, means 500 in Italian. The 500’s were created as a cheap means of transportation. It was manufactured without luxury in mind and designed with only two-seats, suicide doors and 479 cc, 13 horse power engines, able to reach top speeds of 85 km/h.

In 1957, when Fiat produced this car, it was very well liked. It was a beautiful looking car and very fuel efficient. The car was fun and actually quite spacious, despite its small size. Today, people call it the people’s car of Italy, this is a reference to the Volkswagen Beetle which means “the people’s car” in German.

Let’s take a look at the history of this vehicle and the evolution of one of the most iconic cars to have ever graced the roads:

The first of Dante Giacosa’s creations was the Fiat 500 N or the Nuova. It had a two-cylinder, 13hp engine that had a 479 cc (500cc nominal) engine displacement, hence the name. The Nuova had a fabric roof and suicide doors. The 1958 Model was the first 500 to sport the iconic sunroof and the model that began the success of the Fiat as we know it.

A sportier version of the Nuova was also created. This was done to address some people’s concerns over the lack of power. These had a 15 hp engine and a host of cosmetic changes that ranged from wind-up windows to chrome around the headlights. 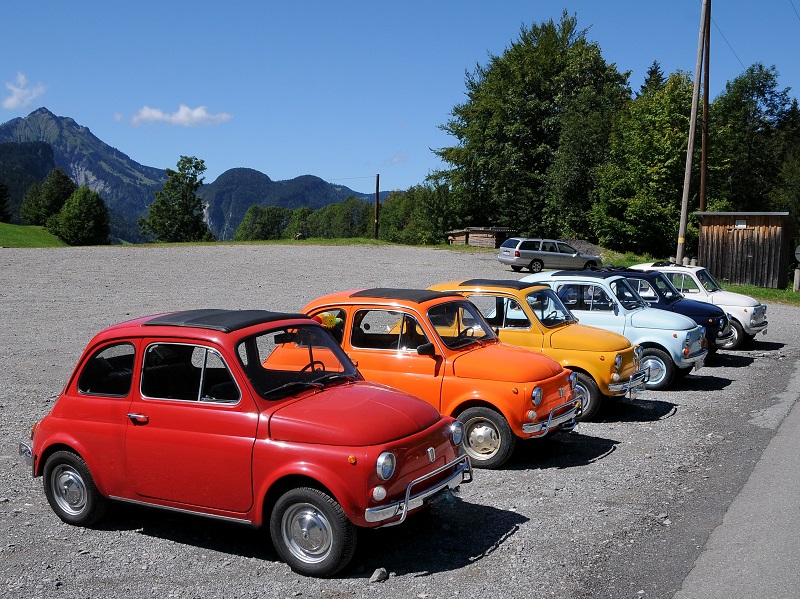 The first replacement for the Nuova was the Fiat 500 D. It actually looked very similar to the Nuova but there were two key differences, namely the engine and the roof. The engine was beefed up to 499 cc and it produced 17 bhp. This engine was used until all the way through to the L model in 1973. The other major change was the roof which could no longer be folded all the way back as in the Nuova. Fully folding rooves became an added extra. The 500 D was also given an ashtray, padded sun visors and a water pump.

In New Zealand, this model was locally produced and sold as the “Fiat Bambina”, still called that till this day. 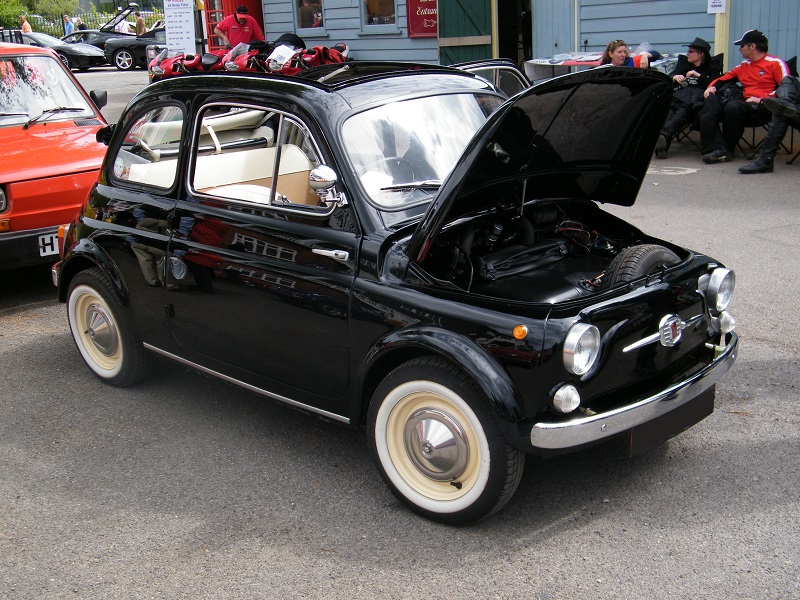 The Giardiniera was introduced to the market in 1960 and was the longest running Fiat 500 for sale with 327 000 Giardiniera models produced. The 500 K’s engine was installed under the floor, in the boot area, to allow for a level loading surface inside the boot, and it still had the suicide doors from the previous models, but this was the last model to have them. The roof stretched all the way to the rear of the vehicle which was a change from the previous models, which had the roof stopped above the driver’s seat.

Furgoncino was a van variation of the Giardiniera which was the same car but in a bigger package. It became the delivery car of choice in Europe at the time. 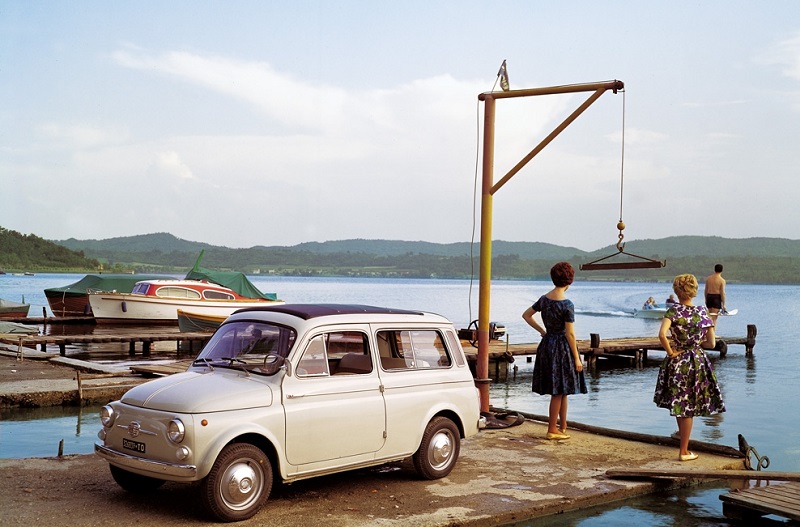 The Berlina actually covers two periods of production, namely the D and the L or Lusso models. We say this because between 1965 and 1969 the F had the same badging as the D. The only difference is the location of the door hinges as the D had suicide doors and the F, from 1965, was made with front hinged doors. From 1969 to 1972, it was sold alongside the Lusso model as a cheaper alternative to the L. Mechanically the F and the L are very similar but the big difference is in the bumpers and the interior. The L has an extra chromed impact bar and the F’s interior is practically identical to the original 1957 Nuova design, but the L is more modern looking inside. 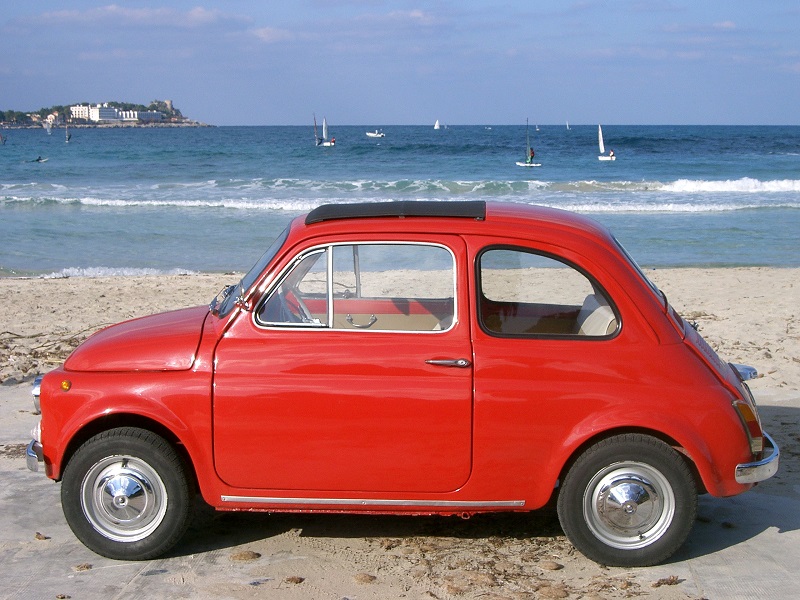 The L was sold as a more upmarket version of the Berlina. This was Fiat’s penultimate classic Fiat 500. The F had a modernized interior, renewed dashboard and greater comfort. 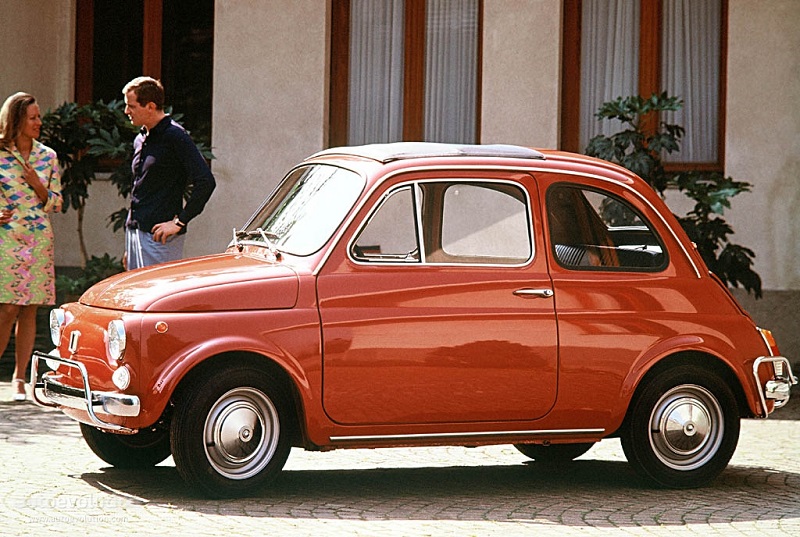 The last classic 500 from Fiat was the R model. The Rinnovata had a much larger 594 cc engine which produced a much needed 23 bhp. The 500 R was also a lot more comfortable and more simply trimmed than previous models. It didn’t even have a petrol gauge, just a low fuel warning light, and it was built with a non-synchromesh “crash-box” transmission. Sadly the 500 R was only sold for about two years as Fiat introduced the Fiat 126 which caused sales to crash. 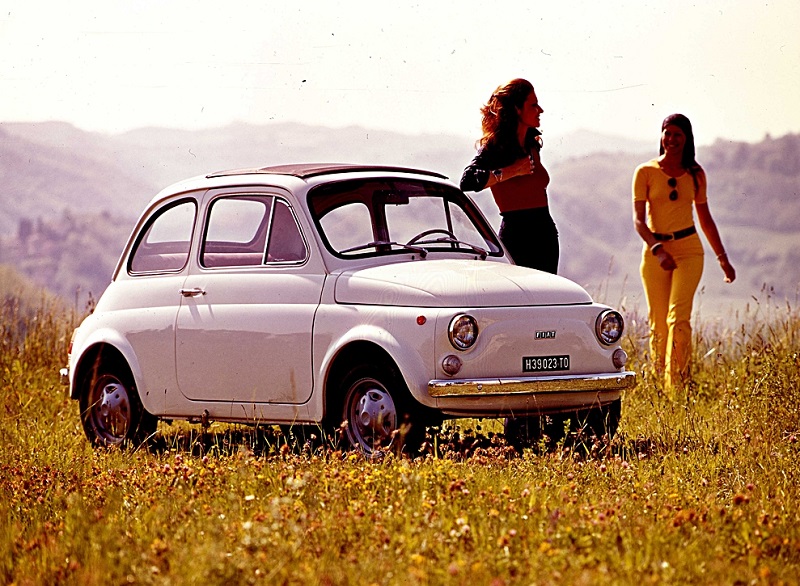 Carrozzeria Ghia, who is one of them most famous Italian Automobile designer ever, didn’t want the 500 to die. So he created a custom “Jolly” version of the 500. Which featured a chopped-roof and no doors with wicker seats and, more often than not, a canopy roof. 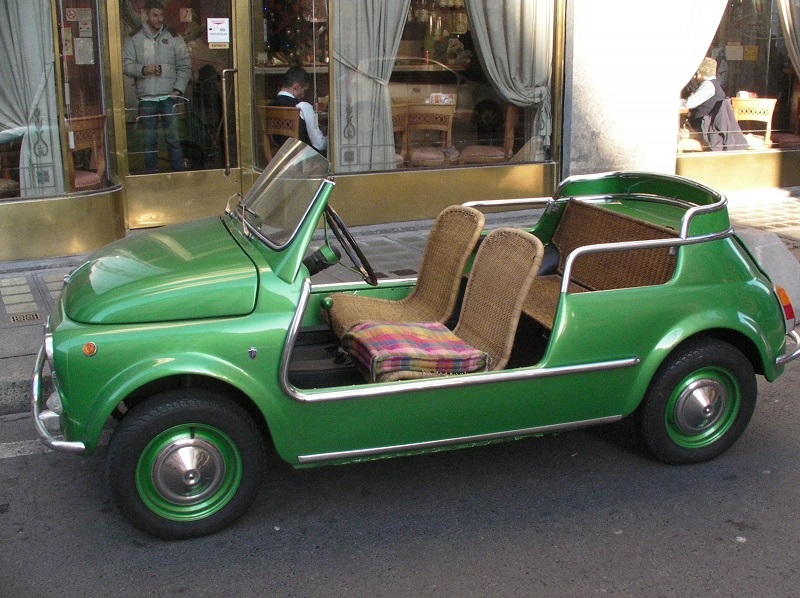 After BMW and Volkswagen had such tremendous success with their small cars, Fiat decided to bring the 500 back. In May 2006, 50 years after the first 500 was made, the 2007 model, which was based on the 2004 Fiat Trepiuno concept, was created. 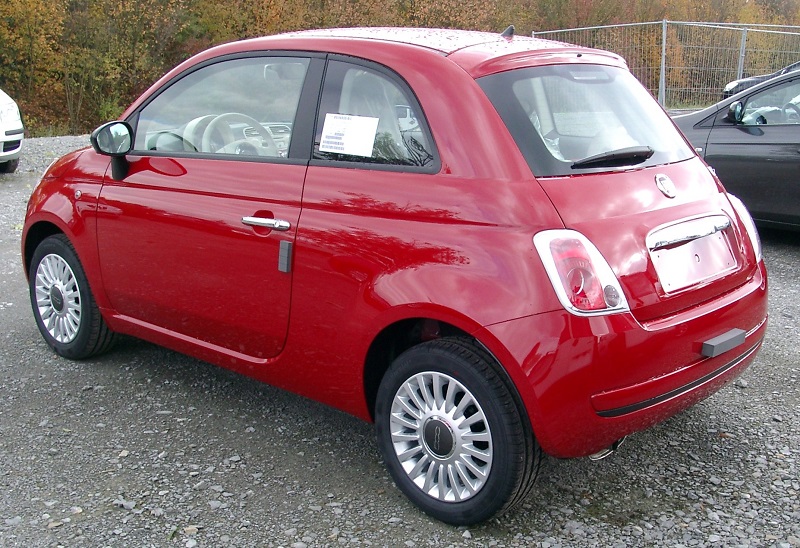 The latest 500 is a retro styled pocket rocket that is all about enjoying the journey. It’s filled with clever technology like a standard TOM-TOM navigation unit and a Dualogic gearbox that can be switched from semi-automatic (no clutch pedal) to automatic at the push of a button. It has fine-tuned suspension, a climate control system and “ultra-comfy” seats. It’s also very safe and scored a five Euro NCAP star rating. It comes with ABS, EBD, HBS, MSR and ESP (Electronic Safety Programme) with a hill holding function so your car cannot roll back.

The new Fiat 500 has a range of models, from the baseline 500 all the way up to the top of the line 500L Trekking. This car has everything you would want in a small car. The 500L Trekking has a raised suspension, a new body kit and much bigger tires and rims. This car also has a 400 liter boot with reclining seats and an even bigger selection of technology and gadgets.

If the funky Fiat 500 gets your pulse racing, why not browse through the many deals on a Fiat 500 for sale in South Africa on www.AutoMart.co.za? Do you have a car to sell? Check out Auto Mart and place your free advert today.