Drag racing is a recognised sport in South Africa. However, in 2013, at the International Transport Forum, South Africa was ranked the worst for illegal drag racing which mainly takes place in Cape Town.

Illegal drag racing is basically racing that takes place on the public roads. Often it is planned, but sometimes it can be spontaneous. However, this act of racing can be truly dangerous because often safety precautions are not taken.

What are the basics of Drag Racing?

Drag racing is a contest that takes place on a track, or a strip. There is a start and a finish, and the competition is often between two vehicles. It can also be a contest in tournament style, where with each race a drag racer is eliminated.

To begin this competition, an electronic device known as a Christmas tree starts the race. This device is used because of its multi-coloured lighting. 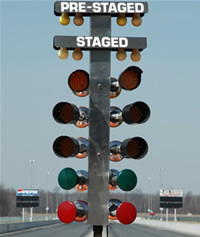 These lights are used to indicate to the racer when it is time to race. If it is a tournament challenge, racers compete against each other until two racers remain.

Look out for the Toyota Land Cruiser Record Event at the Tarlton International Raceway taking place on the 29th and 30th of August 2014. Be there for an amazing drag racing challenge.