Home » QOTD: What Happens When You Put The Wrong Fuel In Your Engine?

QOTD: What Happens When You Put The Wrong Fuel In Your Engine?

Yesterday we started “Question of the day” on our Social platforms, where you can post any car related question you have. It could be funny, educational or just plain out of curiosity. One of our loyal fans; Çarla Çristina asked:

“What ought motorists to do when confronted with the wrong fuel filled in their gas tanks? e.g. Diesel in petrol engine or Petrol in Diesel engine.”

So here we go Carla. Thanks for your question and remember to keep them coming!

Filling your tank is such a mundane everyday task that very little attention is paid when doing it. Mistakes happen, especially if you have both petrol and diesel cars in your garage. It’s so easy to get distracted and pump the wrong fuel.

If you realise your mistake before you start your engine, you are lucky. Simply have your car towed to a shop to drain your tank. Unfortunately this bit might get a bit expensive to make sure your tank is completely clean and no residue has been left behind. Fill your tank with the right fuel and give your engine a few goes. It will sound  funny as well as misfire while it gets all the little bit of diesels out of its pipes.

Not realising your mistake will lead to you driving away, but not getting very far, depending on how much of the right fluid was still left in your tank before you added the wrong stuff.

Damage also depends on your engine; older vehicles will “suffer” less if the mixture of petrol and diesel is not that high.

Diesels engines rely on ‘compression ignition’, which is an internal co 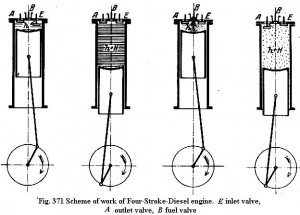 mbustion that uses the heat of the compression to ignite and burn the fuel that has been injected into the combustion chamber. This is what happens when your car goes faster.

Petrol engines generate far lower combustion ratios. Petrol engines don’t need to build that much of compression to burn the fuel; they rely on electric spark ignition, which uses a spark plug to ignite the air-fuel mixture. This is the same reason why some use a spark plug at the tip of their exhaust as a small “flame thrower”.

The gas that is not “used” when your timing is out, is slipped out through the exhaust where the spark plug is mounted. As the fuel passes the spark, it ignites causing a small to moderate flame.

So What Does Petrol do to a Diesel Engine?

The diversity of problems caused when you make a little mix-up downstairs with your fluids are multi-faceted. Explosive petrol vs. diesel’s high flash point. Again, engine design and how the fuel is ignited play a really big role. Gas is formulated to resist spark ignition, so when petrol is put into a diesel engine it will either not ignite, even worse or ignite at a horribly wrong time causing… you guessed it, BAM! An explosion. 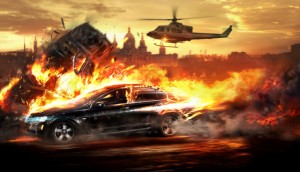 Diesel engines are built tougher as far as pistons, wrist pins and connection rods go. They are made to withstand a big bang, but alas they are still destructible. Diesel is also a very oily fluid, hence its high flash point. So when gas is put into a diesel engine, lubrication will start to run low causing the delivery system as well as valve train to “rub” against each other. Metal-on metal, with obliteration close to follow.

Newer car model manufacturers have made provision for human error. There’s a little plate under the gas cap that prevents anything but the small unleaded-petrol nozzle from fitting into the tank, the same with diesel cars, the diesel nozzle is even bigger.

Bare in mind, older car models doesn’t have this stop plate, neither do motorcycles. If you are still unsure, have a look at the fluid. Diesel is oily and doesn’t evaporate like petrol. Also, it smells different. A lot of petrol stations keep their petrol and diesels tanks separate to avoid confusion and mishaps. If it happens that a garage attendant puts in the wrong fuel, it will have to be taken up with the garage owner as far as costs involved go.

We hope this was helpful Çarla! Let us know, and remember to share with all your friends and family to get them in on the action.