I will make no secret of the fact that I’m a diehard Dodge fan! Nothing says “my pull away will leave you a paraplegic” like an old school Dodge!

So imagine my excitement when I heard there’s a new kid on the Dodge block. A new less paraplegic leaving kid…

But before we get a look at the 2013 model Dodge Dart, let’s take a trip down memory lane first just so that we are all on the same page!

Dodge is part of the Chrysler Corporation, and the Dart name originally appeared on a 1957 show car.

According to R.D. McLaughlin “The Dart was one of the most successful compact cars ever introduced in the American automobile marketplace” so it’s safe to say in the 13 years of production the Dart earned its good reputation.

The first Dodge Dart was introduced in 1960, manufactured to replace the Plymouth.  The Dart sedan and coupes were built on the Plymouth with a 2,997mm wheelbase- shorter than the standard Dodge line.

In 1961 the Dart remained the smallest full-size Dodge.

1965 offered a new performance version of the 273 engine and was released with a 4-barrel carburettor, 10.5:1 compression a more hostile camshaft with solid tappets as well  as other upgrades  which increased the output to 235bHp. Round about this time the Dodge Dart Charger was offered.

The fourth generation (1967-1976) was all about engine enhancement. The Slant-6 engine remained standard, but its power ratio upped from 101bhp to 115bhp all owed to the 225 engine’s larger carburettor and revised camshaft. 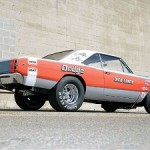 1968: The lights in the grill were moved in and made round.

1969: The entire 1969 Dart range received trim updates including another minor revision of the grille, and a return to rectangular park/turn lights. The 1968 round side marker lights were replaced with rectangular reflectors.

1970: Front and rear changes were brought to the car as well as the 2.8L Slant-6 was replaced with a 3.2L version. Changes to the fuel system improved drivability and economy. 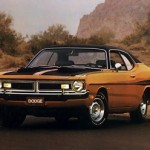 1971: The Custom 2-door hardtop coupe became the Swinger, and the standard Swinger became the Swinger Special. Dodge gained a version of Plymouth’s popular Valiant-based fastback Duster and was to be named the Beaver, but when Chrysler’s marketing department learned that “beaver” was slang for vagina, the vehicle was renamed the Dart Demon.

1972: Revised grille without the central divider, as well as a new instrument collection featuring a large rectangular speedometer and several small round gauges. 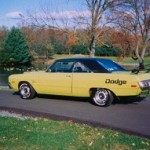 1974: The Swinger and Dart sedan’s rear bumpers grew much more massive. Taillights were larger and were set above the rear bumper, rather than within it. Release of the “Unibelt”, replacing the difficult-to-use separate lap and shoulder belts.

1975: Aside from a new grille, the 1975 models were virtually identical to the 1974s, except that California and certain high-altitude models were equipped with catalytic converters and so required unleaded gasoline. The 198 Slant Six engine was discontinued and the 225 became standard equipment on all models.

1976: This was the Dart’s final year in the North American market. The rear-view mirror was mounted on the windshield rather than from the roof. Front disc brakes became standard, and a new foot-operated parking brake replaced the under-dash T-handle.

And now for the Fifth generation, I’ll be honest and say this post was about telling you how wonderful it is  to have the Dart name back on the street but after my history bit, the 5th generation sucks in comparison!

Let me what you think by leaving a comment.