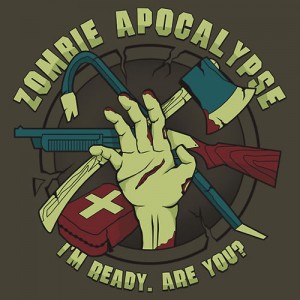 Zombies are supposed to be fictional creatures only found in horror themed movies and stories, but have you given any thought to when fiction becomes reality? Like for instance all this talk about the Zombie Apocalypse…

I’m one of those “believing” sort of folks that gives a little more thought about the origin of our known “stories” such as Little Red Riding Hood, Wolf man and of course Zombies etc.! What are they really, where do they come from; are they true characters that once lived among us or are they used as ‘guides’ for something more disturbing?

Truth be told; if they exist, if there ever will be a Zombie Apocalypse or not  I sure as hell want to be prepared and ready to hall ass to a safe zone because in my butt kicking abilities I don’t have much faith- or at least just at night that is!

So this is how it plays off, one night the town sirens go off, every one awake and scared pantless waiting for further instructions, just to find out all the authority members have been eaten and their flesh only made these blood thirsty monsters more hungry for brains!

Where do you go. How do you get there. Do you have weapons. Are you fighting for yourself or do you want to be the “Save The Day” Hero Type.

Now, in no particular order this is what I think might be your best options when the poop hits; taking into consideration that when that time comes there will be shortage on petrol, food, weapons and common sense!

I’ve watched Death Race many times and I must say I really do want these babies parked in my garage. Zombie Apocalypse or not.

The Dreadnaught which should speak for itself, the 1979 Pontiac Trans Am and the 1966 Buick Riviera V8, for if I should die it at least is in style!

Then there’s always the ‘Russian Chevy Camaro’ that went all out crazy Mad Max style and the “Narco-Tank” which shows you how to home armour your vehicle with metal reinforcements in the front just to name one.

I suppose you’re also going to need a pick up style way of transportation; you know for extra guns, a double matrass to catch some shut eye, and it’s easier for other survivors simply to hop on. You can also drag a zombie or two as a message for other zombies. I’ll suggest an old Ford F100 or F250, they’re tough and built to last.

Furthermore if money or the lack thereof is not a problem you can always invest in a Mercedes-Benz Unimog. They are apparently “designed to perform in disaster emergencies and the harshest conditions”.

And let’s not forget about the $1.5M Russian SUV with bullet proof glass, bullet proof tyres and an impressive sound system  or the Knight XV – ah ha- for that price there better be an impressive amount of Vodka to kill my pain, fill my tummy and keep me warm all apocalypse long!

Seeing as 2012 is also bringing the end of the world when the ice will melt and drown us all, we better stock up on some all-terrain vehicles like the Volkswagen Aqua and WaterCar Python. Vat so Zombies!

Hell, while we’re at it why not throw in the Triumph Rocket III Roadster, and naturally the Batman Begins Batmobile… makes sense to me.

Round about here you should start getting worried if you aren’t already- Hyundai was one step ahead in this dreaded fight against the living dead and is providing us with a ‘Zombie Apocalypse Car’, unveiled at San Diego’s Comic-Con. Hyundai’s Elantra Coupe Zombie Survival Machine. Whoa Scary!

I’ll rather take my chances in a Cabriolet Smart Car thank you very much.

If you can think of any other Zombie bustin cars that need to be on this list please feel free to drop a comment and don’t forget to tell me what you think about the Hyundai Zombie Survival Machine!